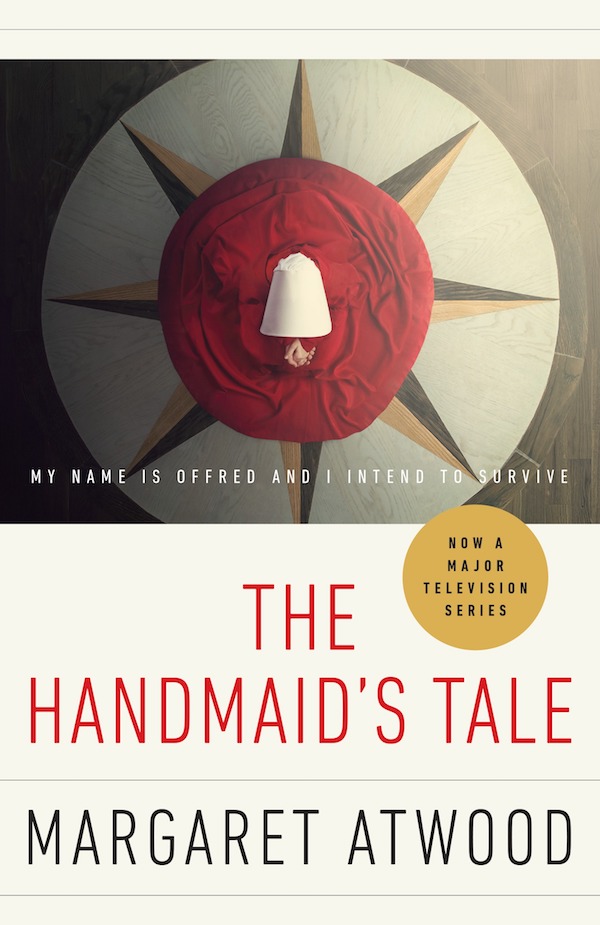 This year’s selection for On the Same Page, our campus-wide book-in-common program, is Margaret Atwood’s The Handmaid’s Tale. This remarkable novel is at once a classic and all too contemporary in its themes and concerns. It reminds us that humankind’s darkest moments (past, present, or future) inspire the most courageous acts of resistance. Read The Handmaid’s Tale over the summer, attend Atwood’s keynote event on campus on August 23, and prepare to be inspired to create the light you want to see in the world.

Student reviewers offered comments such as these:

“What a lucid commentary on society, women’s rights, and the devolution of politics.” (second-year Business and Development Studies major)

“The book is very well written and engaging. Though it describes some dystopian world, the concepts of book are not such a far reach. The book caused me to think more about what could happen with the government in the future. It also caused me to think more deeply about all the freedom that I have now.” (third-year Psychology major)

“This novel is so realistic, so horrifically possible, that I really believe it serves as a wake-up call. It really inspires action and activism to not allow our country to fall under a theocratic tyranny.” (second-year intended Nutritional Science major)

Margaret Atwood was born in 1939 in Ottawa, and grew up in northern Ontario and Quebec, and in Toronto. She received her undergraduate degree from Victoria College at the University of Toronto and her master’s degree from Radcliffe College.

Margaret Atwood is the author of more than forty books of fiction, poetry, and critical essays. Her latest book of short stories is Stone Mattress: Nine Tales (2014). Her MaddAddam trilogy—the Giller and Booker prize-nominated Oryx and Crake (2003), The Year of the Flood (2009), and MaddAddam (2013)—is currently being adapted for HBO. Her most recent non-fiction books are Payback: Debt and the Shadow Side of Wealth (2008) and In Other Words: SF and the Human Imagination (2011). Her novels include The Blind Assassin, winner of the Booker Prize; Alias Grace, which won the Giller Prize in Canada and the Premio Mondello in Italy; and The Robber Bride, Cat’s Eye, The Handmaid’s Tale, and The Penelopiad. Her novel The Heart Goes Last was published in September 2015. In 2018 she published Hag-Seed, a novel revisitation of Shakespeare’s play The Tempest, for the Hogarth Shakespeare Project, and Angel Catbird—with a cat-bird superhero—a graphic novel with co-creator Johnnie Christmas. Margaret Atwood lives in Toronto with writer Graeme Gibson.

A full bibliography may be found here. 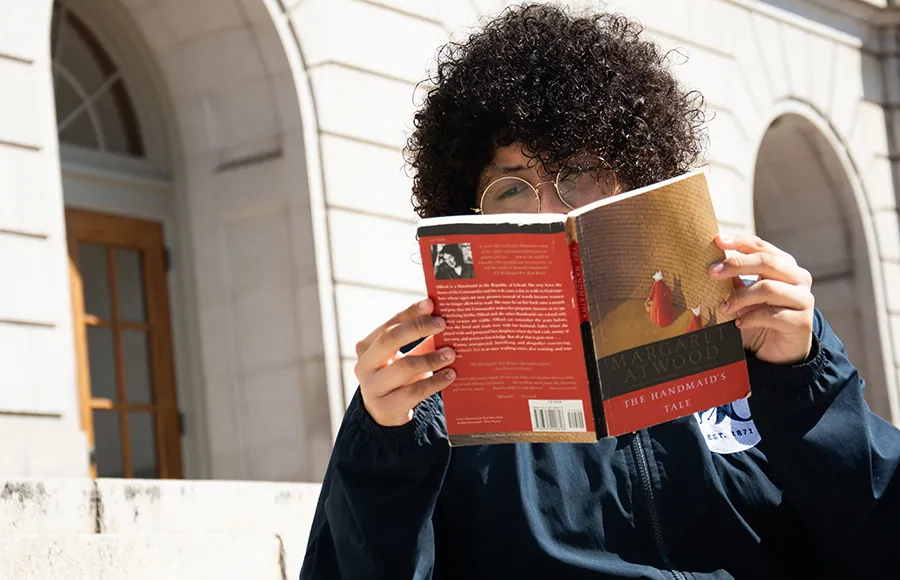 The magic of “The Handmaid’s Tale:” Getting incoming students on the same page through literature
BY ALEX JIMÉNEZ | SENIOR STAFF | Last updated on September 2, 2018 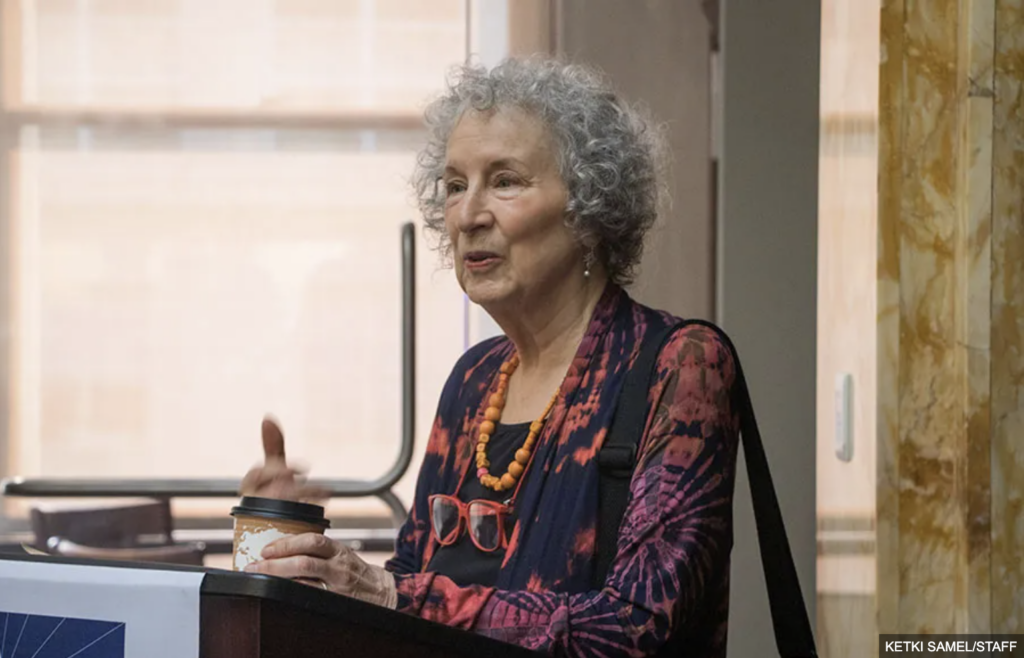 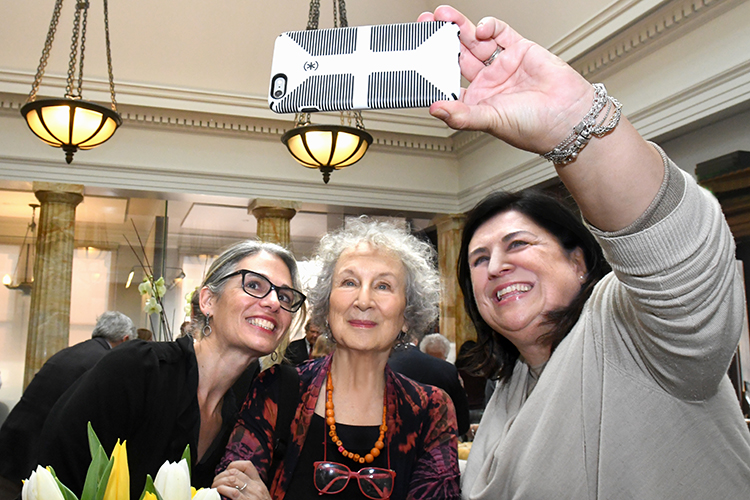 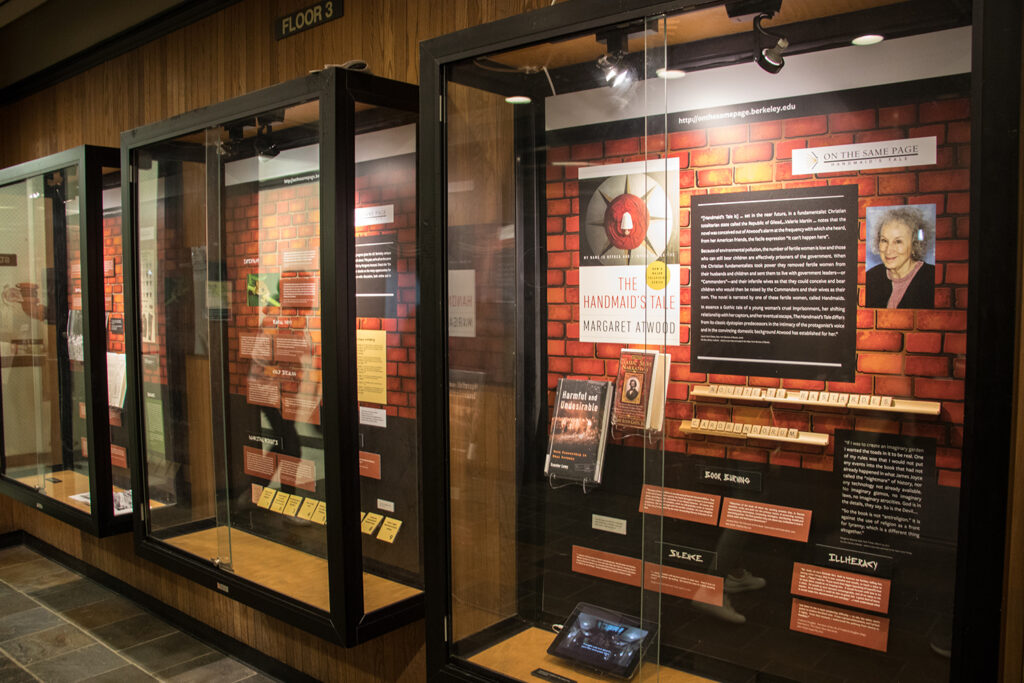 Goodreads Community: On the Same Page with Margaret Atwood
This group is for students, faculty and staff at UC Berkeley who want to discuss The Handmaid’s Tale, the 2018 featured book for On the Same Page.

The Writer’s Tale: Margaret Atwood at Berkeley
Posted on August 23, 2018 by Literatures at the Library

You’re probably thinking that Atwood’s dystopian universe could never happen. A new exhibit on the 3rd floor of Moffitt reveals precisely how each of the aspects of the novel has its roots in the real world.

UC Berkeley Library Guide: On the Same Page 2018: Handmaid’s Tale
Our partners at the library have created a wonderful exhibit to accompany this year’s theme, and a library guide for those teaching or learning about The Handmaid’s Tale. You can see the exhibit for yourself this fall–just bring your Cal ID to Moffitt Library. The exhibit cases are opposite the elevators on the third floor. This library guide includes, among other things, details on the items in the exhibit. 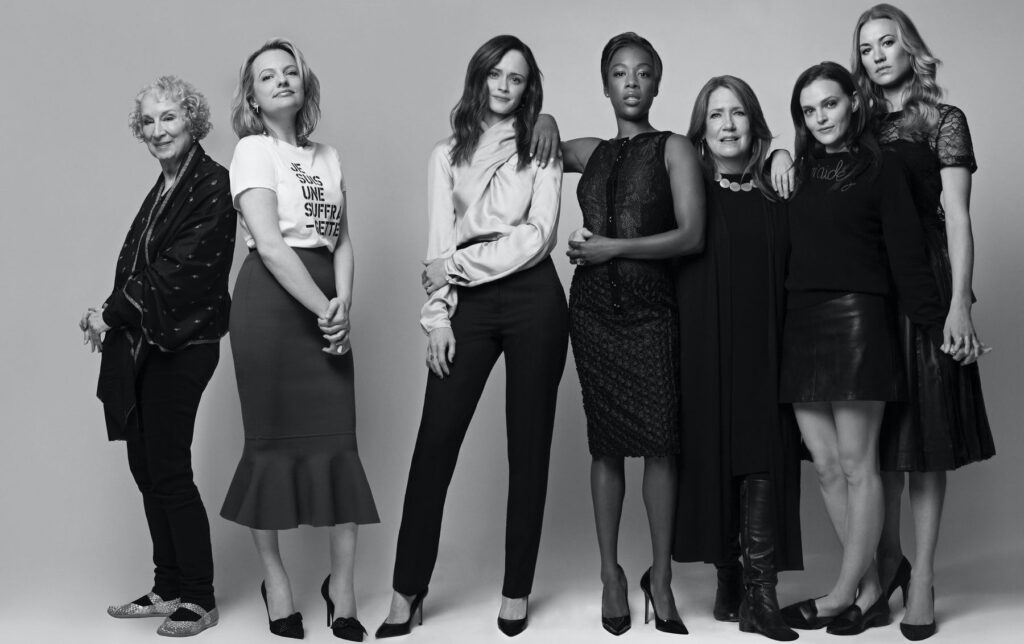 Are you an instructor who wants to use the Hulu series Handmaid’s Tale in your class?

If so, we have good news from the Media Resources Center: they now have DVDs of Season 1 of Handmaid’s Tale in stock. The MRC can provide links for full episodes or clips for you to assign to your students through bCourses. You can either add the MRC to your bCourse site, or the staff there can send you a list of links, or they can teach you how to make your own links (whichever you prefer). They can send you each episode or just select episodes or just select clips—whatever you want to assign to your students!

Check out the behind-the-scenes look at the Hulu series in Vanity Fair. 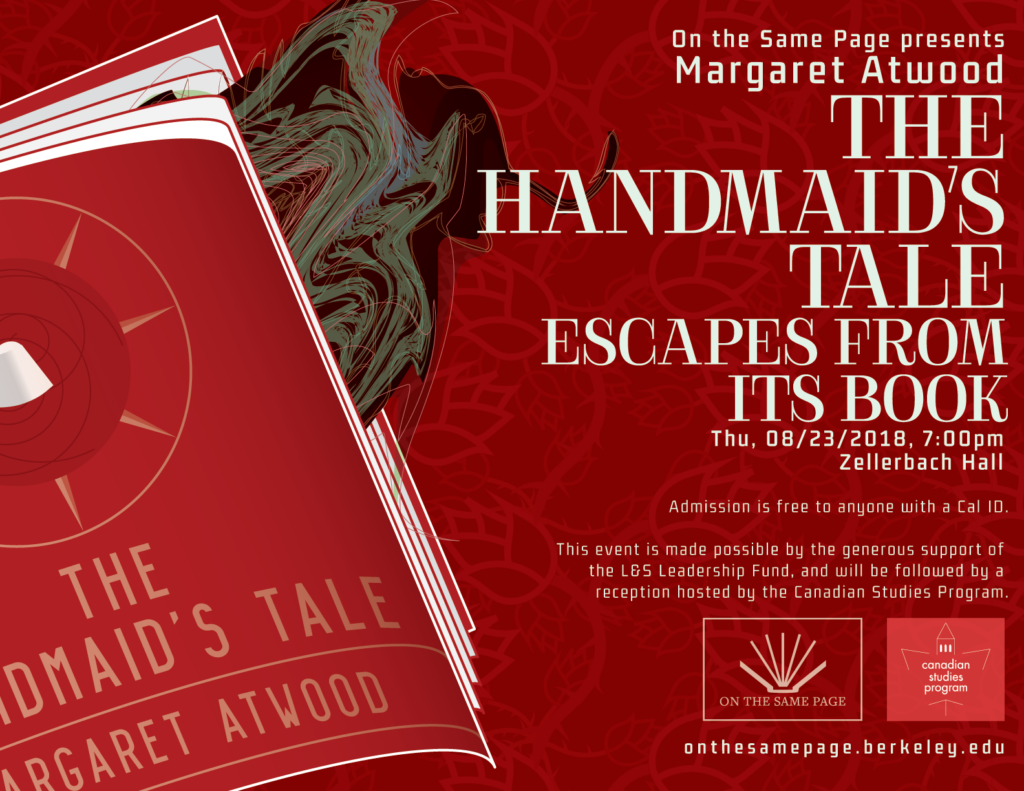 We are honored to host Margaret Atwood for this keynote address. Admission is free to anyone with a Cal i.d. We will begin giving out tickets at 5:30 on lower Sproul–one per Cal ID. Doors open at 6:00. At 6:45 we will open the doors to people without an affiliation to Cal, if seats remain by that point. 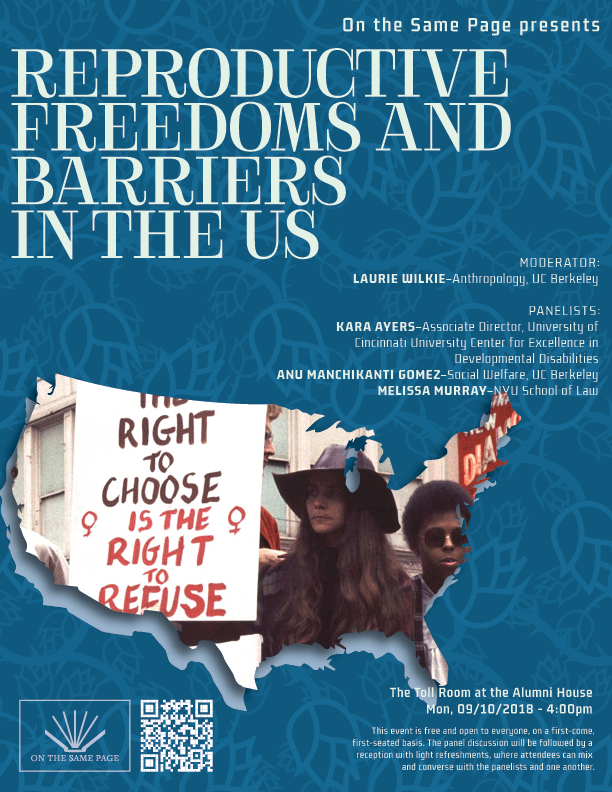 The choice to reproduce (or not) is mediated through an increasingly complex set of social, legal and medical encouragements and barriers for different members of our society.This panel brings together a panel of scholars to discuss the legal, social and medical issues surrounding choice in reproductive decision making. 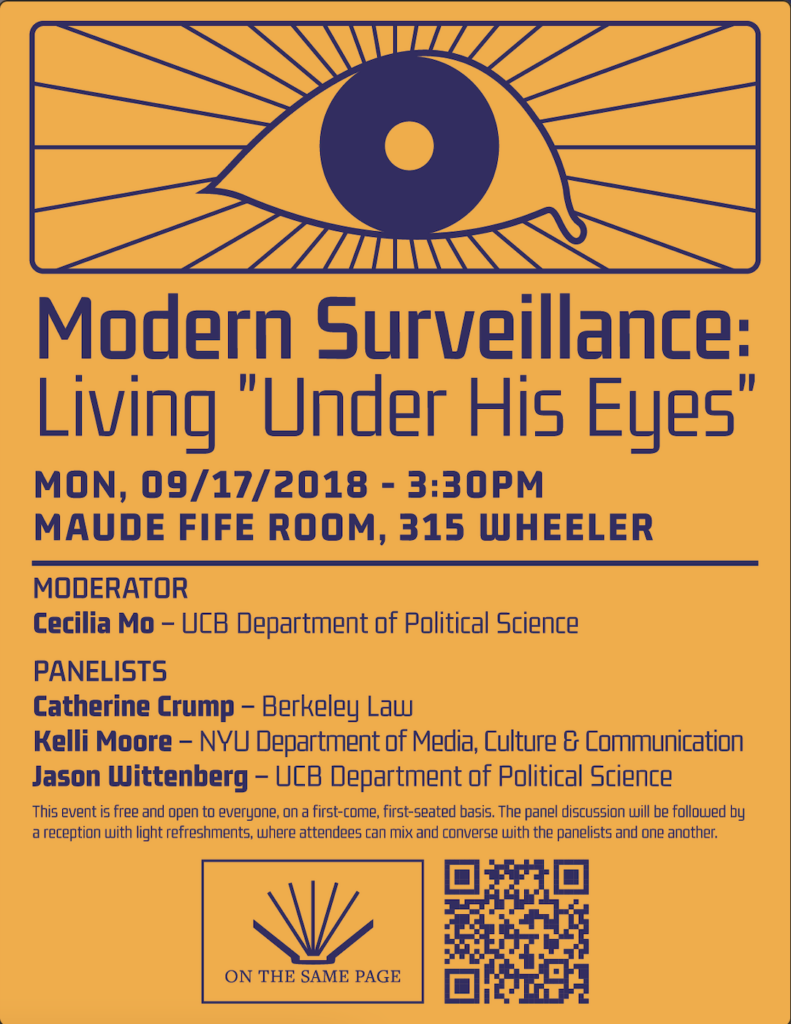 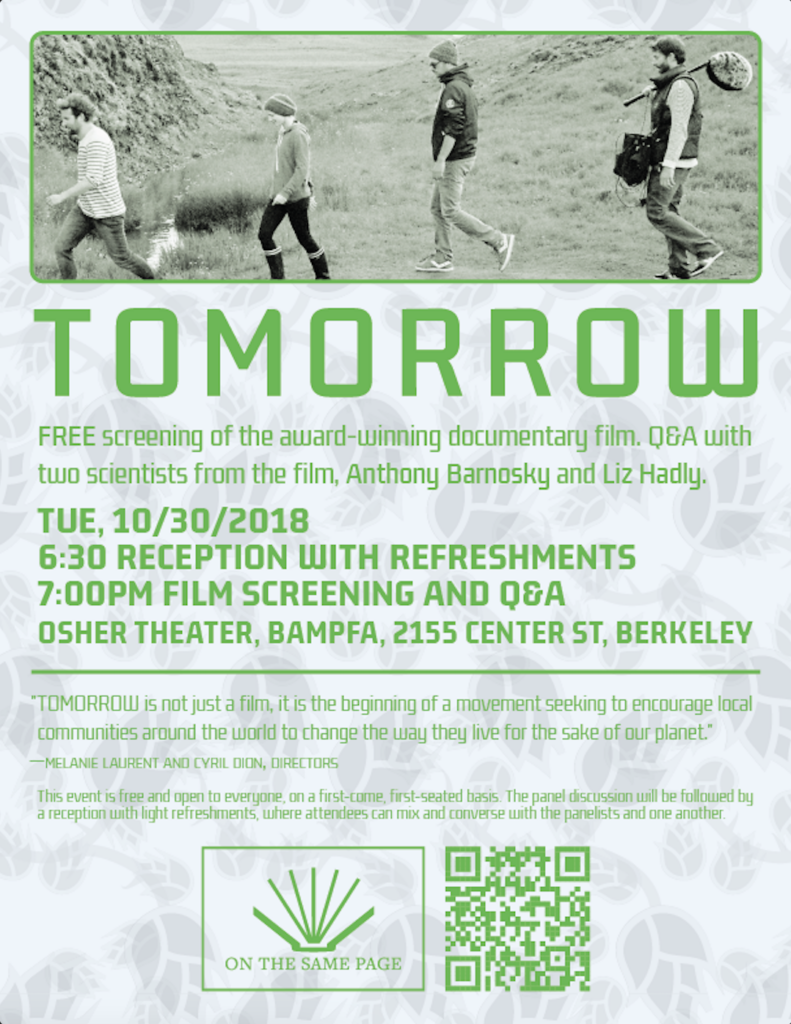 Join us for a free screening of the award-winning documentary film Tomorrow, followed by a discussion with two of the scientists featured in the film, Anthony Barnosky and Liz Hadly. 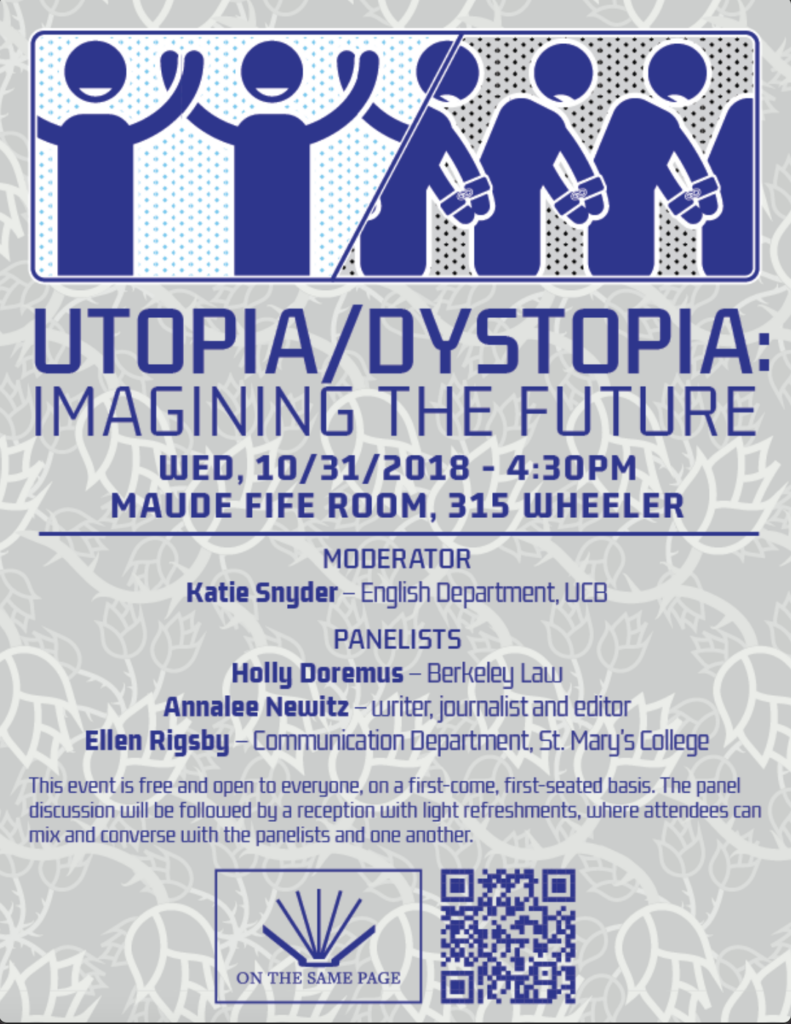 In The Handmaid’s Tale (1985), Margaret Atwood imagined the future as an authoritarian, environmental, and reproductive dystopia. To what extent have we heeded her cautionary tale? How well did her dystopian imaginings predict our present moment? And what dangers and promises does our own future hold?

Atwood Fans: Compete to Introduce Her at the Keynote

Are you a big fan of Margaret Atwood? Would you like to meet her and introduce her at the keynote event? Submit a video audition tape by June 29 for a chance to be chosen for this honor.

The winner will be selected and notified by mid-July.